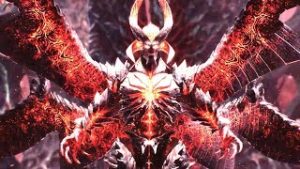 "You know, people keep saying that some of my gear is for killing monsters. Others for killing humans. Heh, nah, all of 'em are for monsters."

Vamarus was born as the son of the great Dark Knight, Melgorath in the Dimension of Hades. Born and raised as a Devil, he was always intended to follow in his father's footsteps, to be a Dark Knight and to fight for his dark brethren. His father trained him in all he knew over the course of a thousand years.

But Vamarus was different from other Devils. He wanted to be a force for good, and not be categorized as evil just because of what he looks like or where he's from. He wanted to kill the bad guys to protect the good ones. But then everything changed...

it all came to an end.

Melgorath was found guilty of treason against the King of Hades, something unprecedented even amongst the vile Demons and Devils that judged this to be truth. But, the sins of the father are not the sins of the son, and thus his punishment was much less severe.

Adrift in the cosmos, Vamarus eventually arrived in the Dark Dimension of Limbo. A place so unspeakable, that even demons fear it. Thus, Vamarus spent the next century conquering the entire dimension, and becoming the absolute ruler of that realm: God-King Vamarus.

Now? Now he has arrived on Rift-Earth, seeking new challenges, yet careful not to leave his kingdom to ruin.

As the Master and Ruler of Limbo, Vamarus commands a great deal of respect from it's denizens and those who know the name.

Invoke: Vamarus gains a bonus when people respect or fear his position.

Compel: Being a King is hard work. Vamarus can be compelled to do anything for the Kingdom he now rules.

A hunter of demons, specifically. But! Vamarus is one who enjoys the challenge of defeating strong opponents, particularly monsters, and often times for pay. Okay fine, he's a mercenary, but he loves doing it!

Invoke: for whenever there is a challenge or contract offered to eliminate or capture a dangerous monster.

Compel: A loooot of monsters have it out for Vamarus, especially demons. They don't like him, and on sight, many would try to kill him.

Despite his usual devil-may-care attitude, Vamarus has a deep code of honor. He refuses to attack someone who is unarmed, he prefers fair fights, and tends not to resort to cheap tricks in order to win. He keeps his word, and never leaves a friend behind.

Invoke: When living up to one's agreement or keeping personal honor intact.

Yes, yes, Vamarus has an extremely playful side. He enjoys mocking his opponents to gain a psychological edge as well as doing things seemingly for the point of doing it. He likes good jokes, but often underestimates his opponents due to the over-excessive witty banter he delivers.

Invoke: When having a chance to berate or insult or be overconfident to his opponent.

Compel: When the oppurtunity presents itself, but is not immediately pursued.

Devils are immune to the flame. At best, it just gets warmer to them.

You may use Arcana instead of Survive in very high magic environments.

Vamarus possesses a nose like a bloodhound and the ears of a fox. Gain a +2 to notice and investigation when using these senses as appropriate. Sensory overload is a problem, in which those senses are decreased in rolls by 1.

You may adopt a single humanoid form that is not your native form and may switch freely between the two. The form must be chosen when Mask is bought and may not be altered. Switching between your forms does not alter your skills or abilities except that it may deny you the body parts needed to use them – for example if your race normally has wings and you polymorph into a form that does not have them you can’t fly. Polymorphing does not hide you from magical or psychic detection of your true nature.

If magical, you gain access to the Arcana skill and an exotic stress track appropriate to your Arcana. You also gain a single arcane purview that is not restricted to a specific school. You may purchase additional arcane purviews for which you meet the requirements at the usual cost. You may not choose magical ability if you have access to the Arcana skill and magical purviews from another source.

The shortest distance between to points is a jaunt through some other dimension. No one said anything about the safest or the smartest. Dimensional Magic makes short work of space for travelling just as Sympathetic Magic makes short work of space for communicating or observing. Teleportations, portals to other dimensions and the ability to influence the very rifts that define the present age are the rewards of those who study this field of magic. Example lower end spells: At the lower end of the complexity and power spectrum, spells that move short distances – some of which may not even be able to move living matter – spells that can close rifts or open ones that others have closed and spells that can open rifts which connect to somewhere else in the same world or plane are the bread and butter of this purview. Example higher end spells: Once you’ve mastered your own plane you can move on to others. More powerful Dimensional Transit spells can teleport further with more accuracy or simply bring more along for the ride, open rifts to other dimensions or even open one way portals to this plane or another. Particularly confident or reckless Dimensional mages might simply bounce into the ether and let the chips fall where they may. Not a bad way to explore, perhaps, though it has plenty of risks.

Devils tend to heal and heal quickly...and are very hard to kill.

You gain an extra exotic stress box. This may be purchased up to 3 times.