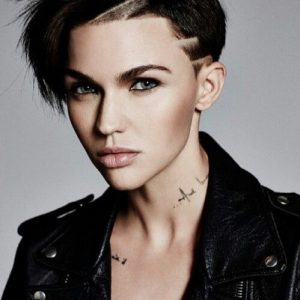 "Survival was my only hope, success my only revenge." -Patricia Cornwell

Valeska was raised in a small monastery in another dimension, learning the martial arts from a young age. When it became clear that she was going to tap into the mystic arts whether she wanted to or not, her teachers instructed her in those arts as well. They were a gentle lot, teaching her the ways of the animals, plants, and natural world in addition to her other tutelage. She knew only that her parents had dropped her off with these monks after some terrible disaster.

The disaster in question was the fall of Atlantis. She was of the True Atlantean bloodline, and they wanted to protect her. They hoped she would grow up, as so many did, to be a champion of the people, and of Atlantean values. Her mentors taught her this per her parent’s request, and she absorbed it in a sort of distant fashion.

Then, one day, Tristian Morian arrived at the monastery door. He was a powerful wizard of the same bloodline, and he wanted to secure her help, along with the help of several others. Atlantis had been taken over by monsters on a world gone mad, and good people were needed to stem the tide of darkness. It was the opportunity she’d waited for all her life, and she said yes, and rather enthusiastically too. He brought her into this world, and they got to work.

For a time, things were good. They helped people. She fell in love with Tristian. They got married.

Then, things were not so good. Tristian became increasingly jealous and controlling. He began making “jokes” about how if she ever leaved, he’d find her and get her back, and that he’d kill anyone else she ever fell in love with. He began flying into rages if she so much talked to another man. And, worse, all was not what it seemed with their little group. She began to hear about protection money, extortion schemes, and “gratitude” payments. They helped people, alright…but those who showed insufficient gratitude were often sold off to slavers. Often items they “recovered from the forces of evil” were just stolen. The more she uncovered, the less she liked.

One day, she removed her wedding ring and used her abilities to slip off before anyone noticed her. When Tristian found the ring, he was furious. He lived up to his promises...he’s been stalking her, and a few run-ins have taught her that no, he’s not likely to give up. Fortunately, she’s not an easy woman to find.

Going solo now, she’s quietly helped people where she could. Sometimes she’s gone on salvage runs or other exploratory missions, but her needs are few. Once she’s met them, she tends to give the money to those who are struggling or in need in other ways. She has jumped into offer rescues here and there, or guidance through tough wilderness areas, always melting back to some secret hideaway in Old Richmond when her job was done.

She knows she needs to find people she can trust, or eventually her luck will run out—either the world or Tristian will see to that. But who to trust? Will she put her faith in the wrong people again? And what happens if she does?

Valeska blends the mystic arts with the martial arts to great effect. As a True Atlantean, she believes firmly in using these abilities to help the helpless and defend the defenseless.

Invoke: Valeska has helped a lot of people, asking nothing in return. In any given local area, there’s a good chance of running into someone who trusts her or feels as though they owe her.

Compel: Valeska has made a lot of enemies. In any given area, there’s a good chance of running into someone who wants to give her horrible, terrible, rotten, no-good, very-bad day.

Cares Too Damn Much

Valeska has built a lot of her identity around being a good, kind person who tries to make the world a better place. Or is it that her confidence in herself has been utterly shattered and martyring herself makes her feel a little bit more okay?

Invoke: It’s easy to tell Valeska cares, and cares a great deal. This can inspire others to trust her. She rarely needs to make use of any particular social artifice to inspire this trust.

Compel: Valeska is likely to involve herself in things which good sense would demand she stay out of, all because she cares too damned much. In addition, this caring makes her awfully easy to manipulate.

Valeska lives in Old Richmond and spends a lot of time in wilderness areas. She’s got a knack for surviving on her own and has explored many locations.

Invoke: There’s a good chance she knows her way around many wilderness areas, and she has the ability to spot pitfalls, good camp sites, decent places to set snares or fish, and more.

Compel: Valeska isn’t particularly comfortable in civilization. Even Saren’s Rest is a little crowded for her tastes. This can make her socially awkward, a bit oblivious to local norms, and far more prone to miss things as she deals with what is, to her, a great deal of sensory overload.

Valeska’s crazy ex-husband is crazy powerful, and he’s still looking for her.

Invoke: Being stalked and threatened by someone who she once gave her entire heart to has inspired some trust issues. Sometimes the red flags and mental alarms start blaring, allowing giving her the clue that she should avoid associating with this or that person—like a douchebag danger sense that just won’t quit.

Compel: The crazy ex-husband has agents just about everywhere, and they really are looking for her (story potential). On a less dire note, sometimes the douchebag danger sense over-corrects, causing her to mistrust people deserve to have the benefit of the doubt.

Arcana – It’s How You Use It

Even a mage with a little power can move mountains if only she knows where to push. Once per session, Valeska may gain a free boost after successfully creating an advantage with Arcana.

When Valeska succeeds with style on a Defend action against an opponent’s Fight roll, she automatically counters with some sort of nerve punch or stunning blow. She gets to attach a Dazed situation aspect to her opponent with a free invoke, instead of just a boost.

You may use survival to track and counter-track both animals and people.

Once per encounter you may use survival to attack provided you have had time to prepare a trap.

At one with the universe, Mystics combine the power of the arcane arts with the powers of the mind. No Mystic studies to become one. Either the universe calls to you and provides you with knowledge, or it does not. Mystics start with the following purviews: Arcane Fundamentals or Auramancy, One psychic discipline of choice, one arcane purview of choice. Mystics may use psychic abilities with Will and purchase psychic disciplines as if they were a psychic, though their magic and their level of exotic stress keys off their Arcana skill. Mystics may learn additional purviews by purchasing them with refresh. They may also open themselves to the Supernatural, allowing beings in the area to partially possess them and communicate through them. This is best done with some caution.

Boons meant to enhance, lift up and empower are the province of those spells collectively known as blessings. The range of effects these spells can produce is rather staggering but they’re all united by the common theme of empowering or aiding someone or something. Many mages like to use these spells on themselves – in fact there are a number of these spells that are only possible to use on themselves. Others use them to enable servants or companions to perform in situations where they don’t otherwise have the means.

Sometimes the best defense is not being noticed. Just as there are abilities to perceive things about people – sense their presence, read their auras – there are abilities that deceive and deaden those senses. To that end psychics who study more subtle applications of their power can mask their own mental strength and abilities – making themselves appear normal or at least less powerful than they actually are. They can deaden the physical senses of those around them, allowing them to slip by unnoticed by suddenly the less observant. They can alter their auras to hide their nature and their mental and emotional states. To aid in knowing when they are being sought, they learn to sense the presence of other powerful minds and as a last resort they learn to shield their mental energies from being siphoned away just like their more defensively minded brethren.

Practitioners of the healing magics are often in high demand and few more so than those who undertake to study the magic of Restoration. It is said that all life is magical and to a certain extent that seems to be true (even if it is also true that most life is not notably magical). Restoration spells nurture that magic, directing it to encourage the body and mind to knit back together, cure maladies and sooth souls.

All True Atlanteans all have a pair of magical tattoos and consequently so do you. The first one protects you from enthrallment or turning by a Vampire. The second allows you to summon a melee weapon from the ether that allows you to make Weapon 2 attacks, ensuring you’re never unarmed.

True Atlaneans have an intensely magical heritage and history. As one, you have a natural lifespan of about five hundred years, can sense the presence of natural places of magic such as ley lines and nexus points, and gain one extra exotic stress box than normal which you may use to power techno-wizard items and similar even if you are not otherwise a mage.

Who Let The Dogs Out?

With the location of the prisoners identified, Catriona calls together her contacts to mount a rescue.

An unconventional saviour; an unusual conversation; some surprising offers; a possible partnership