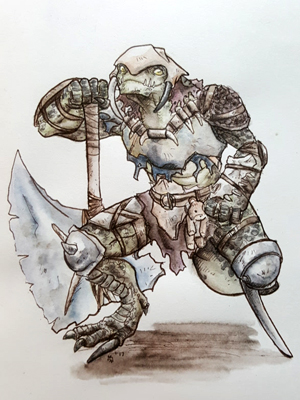 Portrayed By: /Voiced by: Ikue Ōtani

Her people have dwelt far South in the dinosaur ridden swamps for generations, so far as she has known. They kept mainly to themselves and their ways, a hunting and gathering tribe who tamed as well as killed the very beasts for which the swamplands were named, though never in excess.

Pegi is the youngest of her family, with six elder brothers and sisters. Like much of her clan she's learned the basics of survival, of hunting and tracking. Although she dislikes being reminded that she's the baby of the family, she doesn't mind being doted on. Being a highly curious sort, she was one of the few who enjoyed those rare occasions when traders from other tribes and species would enter the deeper part of the swamps where they dwelt. They always had interesting things from the lands beyond, where her people hardly ever dared to wander. She always pestered them for stories for as long as they hung about.

Then one day, she decided to tag along with them on their return trip, determined to venture out of the swamplands and perhaps even see these fabled cities that she's only heard about.

Since then, she's learned that the northern lands can be much fiercer than those she called home.

Fledgling Warrior of the Swamplands

Her people are survivors, hunters and warriors as such a wild land can hone. Although young, she has learned the ways of her tribe.

Invoke: Being no stranger to the challenge of living in the wilderness, Pegi is at her best where her skills in strength, stamina and survival are needed.

Compel: She's unused to areas of high population such as cities, and it's a completely different class of wilds with very different customs and expectations.

Going Out On a Limb

Pegi's learned the hard way that there are far more dangerous things than carnivorous dinosaurs out there, a demon encounter having left her crippled.

Invoke: She's been able to manage with the rudimentary prosthesis that she's been given, thankful to retain the ability to move independently.

Compel: Naturally she'll have some difficulty if she expects to do more than just walk.

...formerly considered trash. Old things, broken things, discarded things can find new life in the hands of someone with an imaginative eye.

Invoke: Whenever she scavenges something that might potentially be of use in the creation of something to her interests.

Compel: It's different scavenging things in cities because people more often than not tend to object. But it's their fault for leaving things there in the first place! :I

Family isn't merely by blood relation. Pegi holds those she favors in high regard.

Invoke: Those she has come to trust and care for, she will claim them as family.

Compel: She's fiercely protective of those she considers her own, and can be reckless with her own safety in favor of doing so.

Having grown up in the wilds, you know how it is to be both hunter and hunted. Your senses must be sharp as a knife. You must be ever aware of your surroundings. You are +2 to Notice and Investigate rolls that use these senses and may use this ability as justification to make rolls where humans might not as makes sense for the situation. As a downside, overcoming aspects like ‘Sensory Overload’ can be a problem for you. The difficulty of all such overcome rolls is increased by one.

You may use Survival to track and counter track both animals and people.

You can use Physique to defend against Fight attacks made with fists or blunt instruments, though you always take 1 shift of stress on a tie.

+2 to Physique rolls made to create advantages on an enemy by wrestling or grappling with them.

In the Wake of the Storm

Ardul and Hunter are at the Restorium checking up on the wounded Saurian they'd brought in and come across Pegi.

Cat’s Out Of The Bag

After settling a course of action with Hunter and Ardul, Felipe learns Pegi is keeping something from him. Things are discussed.

The end of the 'Missing Caravan' arc: after all is said and done, it does nothing to relieve the weight of the tension among the group.

The missing caravan is found, the reasons revealed, and tensions still high.

When Things Are Heating Up

The search for the missing caravan continues to take Ardul, Felipe, Hunter and Pegi into the ever dangerous wilderness where not even flowers are purely what they seem to be.

Another detour on the way to find the missing caravan. This time to a Sauren Sacred Ground where a Wolfen Vessel crashed.

Following up on Otmins request, the journey to find the lost caravan and medic begins

In Need Of A Medic

Sanka'a and Otmin seek out people to assist with a caravan that's been hijacked.

Hunter, Ardul, Felipe and Pegi come upon the abandoned encampment of the missing necromancer and find out that whatever ritual had been attempted to cleanse the land has not been fully completed.

In the Embrace of Plants

Looking for Professor Ingerhasts lost student, a group of Saurian are found.

Felipe and Pegi's trip is waylaid by Vesper's border patrol.

A herbalist and a scavenger meet in the woods. Fortunately both have goods to trade -- oh, and magic acorns.