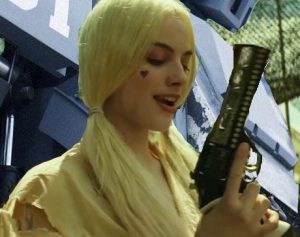 Some people never go crazy. What truly horrible lives they must lead.

There was probably a time when Madeline Harrow was as sane, responsible and obedient as the next robot pilot but that time has long past. For the last four years, Maddy Harrower and her Titan robot she affectionately calls 'Tits' have been moving from locale to locale to offer assistance and firepower to the 'good guys' - as determined by Maddy. Once committed to a cause she will follow it through to the end before moving on like nothing happened.

No one is sure how she got this way. You don't just find a robot on the side of the road and know how to operate and repair it. That's usually the domain of an organised military or at least mercenaries.  There are rumors about her of course. That she was in  a CS Unit that was ambushed in the Swarm Wars and she was the only survivor. And what she saw that day snapped her mind. It's as good a story as any.

Definitely crazy - 'Putting the Mad in Maddy' - she is also trustworthy, brave and reliable in her own way. But don't expect a rational conversation even though she knows how to keep a robot going after years of wandering firefights and scrounging parts.

Maddy has spent a lot of time alone with her unit; they often chat together though only one voice is ever heard.

Invoke: With no thought of personal safety, she uses her robot to help out others with a grin on her face and a song badly sung.

Compel: No one is a huge fan of people who talk to themselves. Especially when they drive an armed robot. Suspicion and fear are often sent her way.

People behave differently to robots and Maddy can find this challenging.

Invoke: A breath of fresh air in a tense situation, she can get herself out of situations with some quite lateral thinking.

Compel: She often says the wrong thing...out loud...to the wrong person and has no idea she even spoke.

Titans Are A Girl's Best Friend

Maddy is emotionally linked to her robot. They've been through a lot together and will never part.

Invoke: When Maddy is with her Titan (Tits) then she is a zen space and can think a little clearer than normal.

Compel: If there is heavy damage to her robot, Maddy will do all she can to get it fixed there and then. There is no voluntary abandonment of her machine in battle, no matter the danger.

Roadblock? What roadblock? When using the favored chassis, you may accept stress equal to the value of an obstacle between zones in order to Overcome it without a roll. This damage is mitigated by armor as normal. The obstacle must be one the chassis is capable of bypassing. For example, no bypassing yawning chasms in non-flight capable armor in this fashion.

You’re used to stretching your energy supplies and ammunition and keeping yourself going in the wilderness whether on military patrol or exploring. You never suffer penalties or increased difficulty to Craft rolls for lack of tools or facilities when working on your favored chassis.

Quick on the Draw

You can use Shoot instead of Notice to determine turn order in any physical conflict where shooting quickly would be useful.

With everyone in position, all Jericho and Natsuki's forces can do is wait. However not everyone likes waiting quietly.

Maddy is doing hand-to-hand combat training in preparation for the fish assault. Catriona attempts to correct.

Scrounging for the Scrounger

Maddy goes looking for Xeenia to give her a map.

The Quest for A Map

Xeenia needs a map to help with her demon hunting so she tries the ever-helpful Leo. Maybe not the best choice but Maddy is there to help.

Engagement on the Border

Natsuki gets to put her Cat through some paces in a real situation .

Sitting On The Dock Of The Bay

Why would someone climb the side of a building in Vesper? That's what Slaine and Maddy want to know.

Maddy and Wraith head into the Wastes to infiltrate Cannibals and rescue a captive.

In trying to 'sell' the idea of their...newly found relationship, Slaine and Kaji drop by a cafe and come across the best pair to seal it. ...or is it worst?

A meeting with Psi-Stalkers is interrupted ... by ... surprise, surprise ... Demons

A floating set of ashcans and more consternation for Stella

Following up on the information Ted Mercier found out at the bar, Kaji and company head out to Old Richmond in search of the location of a potential necromancer suspect.

After hearing of mysterious disappearances along one of the routes through Old Richmond, Slaine and company investigate on the hunch that it might have something to do with the soul harvesters.

Maddy is recruited to escort Stella's transporter. No journey ever goes smoothly.

Maddy returns from Greywall and gets new marching orders. Stella gets a job and Varos gets bad news.

The Gift of Fire

Maddy encounters Wraith in Greywall and they exchange notes on the strange happenings.

Maddy gives an update on what's been happening in Greywall.

Keeping watch over Greywall, a newcomer and ... something attacks. (Emits by Jericho and Natsuki)

Maddy arrives at Greywall whilst the villagers are harvesting. Turns out her timing is impeccable. Pity about her choice of music.

Slaine has a precog moment - or is it precog? - and saves Kaji from being squished by barrels.

A drunk Maddy finds Elysia, Slaine and Aiden in Sarens Rest. Elysia is looking to go into Vanished Point alone.

Under The Shade Of A Cool-Brah Tree

When an Estate Manager from a Noble House and a Guild House Factor turn up in a Dogwood Tavern, you can be sure they mean business.

Don't mess with the contractors who are conducting border checks, you'll get wet.

After a fight in the streets is put down, a group of adventurers catch up.

Comtesse Lorna Crowley calls together mercernaries to help with the Demon incursions.

Mad One and The Seraphim

Maddy is lost and Stander wants to avoid his 'family'.

Leo gets a couple customers.

Who Let The Dogs Out?

With the location of the prisoners identified, Catriona calls together her contacts to mount a rescue.

While checking the loot from the Pirates haul, Maddy decodes the data that was recovered

A convoy of important supplies from Dogwood to Vesper comes under attack.

A Horune Pirate Ship has run aground and people need saving

Ronin encounters Maddy for the first time and gets the wrong impression about her Tits.

Maddy, Tessa and Ardul rescue a trapped team carrying something that someone in Saren's Rest is very, very interested in.

Rousseau offers the girls a little job... Probably involving fighting demons for lost cargo in a half sunken city.