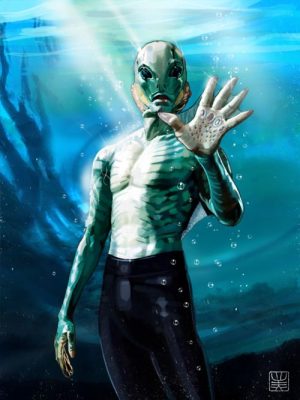 "A demon's evil is almost as dependable as a human's stupidity... or is it the other way around?"

Although well over a hundred, Professor Loro Korol is 'in his 30s-40s' by the standards of his species -- the Kressh -- and he has devoted his adult life to knowledge. His field of expertise: demons.

It began with studies into the supernatural, following in the currents of his parents, so to speak. As scholars with little experience of demons, they had journeyed to Rifts Earth first, along with a few others of their kind, from their homeworld; Loro was born here, making him technically a native.

Initially, they underestimated the threat -- greatly. Such was their curiosity. It cost Loro's father his life... and then his mother decades later. Loro purposed to be more careful, even if his drive 'to know' meant taking risks. He earned a reputation for being prepared to 'go anywhere' (almost) and 'brave anything' in the pursuit of knowledge, and the hope that what he discovers will help others stay alive.
After the island known as Vanished Point returned, and the elder dragon, Sarenthon, made his deal with the Demon Lord there, Loro Korol offered his services to Sarenthon. The dragon accepted (minions are always welcome), and Loro based himself in Saren's Rest.

Loro Korol has always been an insatiable student, particularly when it comes to Rifts, supernaturals -- and especially demons. Ever since the Rifts came to Earth, they have brought demonkind with them, and he finds it simply fascinating. The effect of Rifts and their denizens on the ocean is of particular interest.

Compel: Whenever demons or supernaturals object to being studied, or Korol is kept from water too long, or his being a D-Bee (rather, just non-human) proves to be an disadvantage.

Korol is entirely dedicated to the pursuit of knowledge, and his fields of expertise (one in particular) are not exactly 'safe'. He 'has to know'; he will go anywhere, brave anything for the need to discover something new -- often at his own expense.

Invoke: Whenever that insatiable desire for knowledge earns him notoriety with someone, or pays off unexpectedly.

Compel: Whenever that insatiable desire for knowledge gets him into trouble (such as attracting the wrong attention, venturing into dangerous places, staying too long in such places, leading him to make compromises...)

In the Dragon's Employ

Korol's employment in the services of Sarenthon is not exclusive, but takes up a portion of his time. In return for modest pay, Korol goes where he's sent, gathers information, performs experiments, whatever he's told -- within the scope of his expertise. The work is often very dangerous.

Invoke: Whenever claiming to work for Sarenthon earns him notoriety (rare -- this connection is usually kept secret), or the work pays especially well, or his respect (even fear) of the dragon inspires him to push himself harder.

Compel: Whenever the danger proves worse than expected, or Korol finds himself among those who would exploit his connections (however tenuous those connections may be), or his respect/fear leads him to be irrational.

Professor Loro Korol's studies into demonology and the supernatural often put him in contact with other institutes of learning - in particular the academy in Vesper. Loro sometimes does favours for these institutes, or requires one in turn.

Invoke: Whenever his connections with the academy prove useful to him, such as notoriety, favours, information...

Compel: Whenever a favour is required, or there is a conflict of interest, or notoriety backfires (such as drawing unwanted attention).

Loro has an especial affinity for manipulating some physical phenomena (water).

Hydrokine are the masters of the most common liquid on earth. They can sense it and call it to them. They can tell at a glance what’s in it and what it might do. They can freeze or boil it. They can hurl it around with a thought.

This is the ability to touch and influence the conscious minds of others: words, images, illusions, mind-control...

Kressh are an amphibious, humanoid species known for their inquisitiveness. In many respects they are much like humans.

Given the extreme dark in deep water, Loro relies on superb sound and smell more than his eyesight. Gains +2 to Notice and Investigate rolls that use these senses and may use this ability as justification.

Korol can breathe underwater, and has webbed hands and feet. When swimming, he is both fast and agile and gains a +2 to Athletics checks in an aquatic environment.

(Racial) Slippery as an Eel

His body is coated with a natural oil, making him difficult to grab onto; gains a +2 to Athletics checks when evading a grapple, or crawling through a narrow space.

Loro can produce a light that psychically attempts to compel others to stare at it. He may make a Will-based attempt to inflict an aspect called ‘Caught in the Lights’ on everyone looking at him. This may be resisted by Will.

Gains a +2 to all Lore rolls relating to Demonology

Psychics versed in ESP can sense the presence of other psychics, of magic, of supernatural evil, of tears in the fabric of reality. They can sense the passage of time down to the nanosecond. They can see auras and creatures that have been made invisible by mystical or psychic means.

In His Element: Water

May use Athletics instead of Notice to determine turn order, ir combat is initiated in an Aquatic environment.

May use Lore for topics relating to magic and the occult.

Orca's are playing in the bay near Vesper. One of them decides to come play with the land lubbers

Careful What You Buy

Demon bits are on sale in the Market Town of Vesper.

Megana Shadowcleft meets a glowing, aquatic D-Bee with a penchant for seeking out demons...