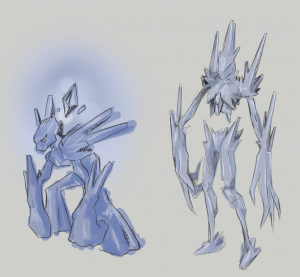 In one corner of the Earth Elemental Plane, a war has been raging for control of resources. On the losing side of the war, a species of crystalline elementals pool the last remaining bits of their resources into a desperate gamble to flee and avoid being (literally) consumed by their enemies.

The first attempt to open a portal to another plane was both a stunning success and an unmitigated disaster. They now had the knowledge to open such a portal again with a greater degree of control, but had lost their people’s leader -- their Prince -- through the first test portal when their enemies chose that exact moment to attack.

While preparations continued to create a portal stable enough to send their people through to another plane and to safety, a small side contingent created a smaller portal in an attempt to rescue their lost Prince. They configured the portal to allow one entity through in each direction, and one only. Now all they needed was a volunteer to find and return the Prince to his people.
Kthzyx, one of the Prince’s personal staff, volunteered to go through the smaller portal.

Stranger in a Strange Land

Kthzyx is very clearly from elsewhere. She (pronoun chosen based on mannerisms and general body shape that resemble local cultural norms, not actual sex or gender) is here and has no way to return to her home plane.

Invoke: She is going to be searching for a way to return to her home plane.

Compel: The pursuit of a way home puts her and friends into potentially dangerous situations.

Zyx knows she’s stranded on this squishy plane, and she volunteered to make the sacrifice so her people’s prince could return to them.

Invoke: The knowledge that she’s here by choice can make some of the hardships she’s bound to endure more bearable.

Compel: There will be times when she will be bitter about the direction that her life has taken, even if she did choose to be here.

Kthzyx is, obviously a being from an elemental plane This… squishy plane is so utterly foreign to anything she has ever experienced before. Even the simplest concepts and items will be a challenge for her to understand.

Invoke: Zyx might use her unfamiliarity with the squishy plane to her advantage, to scare antagonists off, or get someone to help the poor, lost, confused crystal person.

Compel: Squishy plane people are just so WEIRD. To the point that sometimes she just can’t handle the weirdness a moment longer.

The language of Zyx’s home elemental plane does not translate. At all. It very well could be above or below human hearing range, if not both simultaneously. Thus, learning to use the sound range of the squishy plane is going to take time.

Invoke: If she finds another individual that speaks ‘crystal’, they’d have a way to converse that NO fleshy sack of mostly water could follow.

Compel: Conveying what she needs or wants to others is going to be a problem. At times, a serious problem. Even when she does understand the words, she might not understand the concepts behind them. Colloquialisms and sarcasm are going to be completely lost on her.

I Am What I Eat

Zyx’s profession on her home plane was the creator and purveyor of foodstuffs for her people, or more specifically, for the prince of her people. She grew crystals, she eats crystals, she is comprised of crystals.

Invoke: She can make use of the crystals around her to ‘grow’ her own food. She can also ‘grow’ crystals and gems to various specifications for other reasons.

Compel: She can’t create crystals from nothing. If there’s nothing for her to work with, she’s at distinct risk of starvation. Her food is worth a lot to people and might wind up stolen. The crystals and gems here aren’t ‘alive’ either and might not always respond to her power predictably.

She is an extra-dimensional being. VERY extra dimensional. She’s not even humanoid, unless she chooses to be.

May control, alter, and grow crystalline structures and lattices. This skill is governed by Crafts when a roll is needed.

May instantly appraise the structure, quality and value of gems and crystals.

Can rearrange the placement of the crystalline structures of her physical form at will, thus making herself seem taller, broader, quadruped, avian, shaped like a sofa…

Crystal elementals can control light that enters their bodies, refracting and reflecting it in very precise ways. They can cause the light to flash brightly, project rainbows and even master hologram like illusions. This ability cannot be used to directly harm. Elementals can also see on spectra of light that normal flesh beings cannot.

The group has made it back from defeating the Titan and have been recuperating, but there's still one more thing to do before they can completely halt the process of deification.

The Heart of the Problem

Preparations finally made, Kthzyx guides Aiden, Elpida, Slaine and Varos through an elemental dimension to confront and destroy the Titan before it can do the same to them.

Sorry, Did You Say ‘Titan?’

Aiden and the others arrive at the Monastery in hopes of finding the answers they seek. Not all of the information they're told is good news.

The giant robot is brought home. Sanka'a has questions, and then there's the problem of what to do with the thing.

Raiders of the Lost Vault

Things get off to a rocky start, but Aiden, Kaji, Kthzyx and Slaine manage to find what they're looking for, even if they had no idea what to expect.

Once again Aiden, Slaine, Kaji and Kthzyx find themselves conscripted to assist in heading off some CS problems before they can get worse.

Opportunity Is Not a Lengthy Visitor

With the turn of the seasons just around the corner, merchants and traders head to Vesper's marketplace to sell their wares, others come to enjoy them, and yet others take advantage of the crowds drawn.

Accompanied by Slaine and Kaji, Aiden goes to see if Kthzyx has any crystals in stock and gets a bit more than he bargained for.

Responding to an unspecified distress call, Aiden, Slaine, Kthzyx and Varos head out to the mountains.

I’m On a Mission

Elpida's got some business with Varos, and not of the fashion sort.

Leo's been busy trying to get back into the swing of things after his slight...mishap. But it's all better now!

Let Me Give It a Try

The problem with the creepy dolls only gets worse as circumstances so helpfully present themselves during preparations for year-closing festivities.

Vesper and the surrounding region is saved yet again by a handful of people. Some of them are certainly heroes and even the lone Shifter in their midst manages to call upon the better side of her nature in order to save the day and maybe find the answers everyone is so desperate to have.

To Catch a Dog Boy

After the latest developments with the news of a Coalition presence so close to home, Captain Sanka'a has a proposal for Aiden and company.

Megana and Varos talk with Kthzyx over a possible precious stone commission.

Kthzyx officially gets a space to sell her crystal wares.

A renowned dealer in crystals shows some interest in Kthzyx but seems ready to offer job proposals all around.

Similar interests of one sort or another draw the paths of a Dolphin Singer, a Chaos Mage, an Elven Technomage and a Living Crystal to cross.

More Than Bargained For

Slaine's ever so popular among the astral projectors as another shows up to confront her and friends during a shopping trip for WMDs.

Having been charged with obtaining something from Professor Ingerhast, a reluctant Elpida goes to pay the spider-woman a visit, accompanied by Kaji and Kthzyx.

Look What The Rift Dragged In

Routine patrols in Richmond, general aren't and Caravan escort duty gets interesting when a Rift opens right on top of it.

Zyx approaches Sterling for an appraisal, but soon learns that the jolly, absent-minded technowizard isn't as nice as he seems.

Whilst farming some crystals, Zyx finds a hidden facility

What does a dolphin, a dragon and a crystal entity have in common? Crystals!

Leo vs. the Giant Crystal

Kthzyx is exploring the Market Town when a truly ... unique man with a disturbing lack of social skills accosts her. But not like that.

Elpida, Kaji and Zyx are called in to see what answers they can pry from the mage they'd hauled in a few weeks back.

The Rite of Spring

Spring festivities have begun, and draws interesting individuals to gather.

After hearing of mysterious disappearances along one of the routes through Old Richmond, Slaine and company investigate on the hunch that it might have something to do with the soul harvesters.

Megana surprises Kaji and Kthzyx with snacks. The trio have plenty to catch up on and explain.

Ardul leads a small team up into the mountains to investigate another ritual site, but this one's been freshly used...and still active.

Come Into My Lair

Professor Ingerghast summons Kaji and Ardul to her office with disturbing news. (Emits by Hunter).

The Seventeenth Most Tasty

A chance meeting in the Forum leads to work plus a discussion about what's the most tasty meat.

Why Is It Always Dogwood?

After a scintillating discussion about meat with a talking raptor, Aiden and the others hit the bar, meet up with a couple of the usual suspects and catch up on things.

The Touch Of Fabric

Following the trail on the last demon attack, a ritual site is discovered.

What The Dragon Wants…

Sarenthon seeks out a band of adventurers in Vanished Point to take delivery of something they've retrieved.

What starts as a bit of wining and dining turns into crystal-eating, earth-choking and head-achenology curing... This is Vesper!

A trip through the market place, a crystal purchase and a head shot...

Hunter brings some crystals back from an excursion into Vanished Point. Zyx sings to them and ... all hell breaks loose.

A delegation of Psi-Stalkers appear in Vesper with bad tidings.

At The Bottom Of A Cart

There's action at the checkpoint on Highway 301.

Pebble for Your Thoughts

Howahkan and Kthzyx meet in the wilds, with a whole bunch of crystals.

Kthzyx is reunited with the Prince and plans are made

The song of Earthsky (and a crystalline entity -- Kthzyx), draws a number of people to the same place -- people who then discover that talking to crystals is not as easy as it sounds (actually it sounds more 'mad' than easy).

Something upsets the elements in the wilds of Vesper