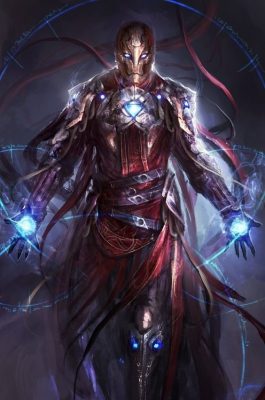 If you ever found yourself wandering along the streets of Vesper you may have come across a peculiar shop nestled in the back end of one of Vesper’s less traveled roads. The neon lights above the shop’s door glow with flowing streams of pink and blue within the tubes while the shop’s large display window catch golden gleams from the last rays of light. Welcome to “Sterling’s” a shop specializing in the fabrication of magical items for the discerning individual.

The proprietor of the shop Kaspar Sterling (Sterling to his business associates, Kas to his friends) is a techno-wizard of small reputation, but with a growing list of clientele. Tending to keep his relationships professional, Sterling often doesn’t discuss about his personal life or why there is gurgoyle running the housekeeping of the shop and occasional physical enforcement. While there is little known about Sterling’s personal life many people speculate that he comes from a well to do family of varying magical aptitude that bears the same name. If this connection is real, then it begs to question what Sterling is doing so far away from the family with the household’s gurgoyle housekeeper and nanny.

The truth is Sterling is from the suspected family and did leave with his nanny over a rather divisive situation. Gertrude is the gurgolye responsible for caring for nearly eight generations of Sterlings in addition to maintaining the day to day running of the Sterling household. Having been summoned and bound to the family name nearly a millennia ago, Gertrude had faithfully carried out her duties until one child came along. While each and every child of the Sterling name is familiar and respects Gertrude, none of them loved her more or treated her as family like Kaspar Sterling. To Gertrude raising Kaspar was the greatest joy she had ever known (if not often taxing due to his headstrong nature) and often regards him as the son she never had.

As is tradition in the Sterling family the eldest child inherits the family estate and all things within it, including Gertrude. Kaspar being the eldest was destined in his parents’ eyes to continue the Sterling legacy, but the wanderlust in his heart and curiosity in his eyes put Kaspar at odds with his parents as he decided to pursue a life of his own. As his own magic abilities developed, Kaspar also felt the increased need to spend his life researching the mysteries of the arcane to pass it on for future generations. When Kaspar had become a man he rejected his inheritance passing it on to his sister Adelaide. Shocked and outraged Kaspar’s parents confronted him about his choice saying that he had a duty and obligation to the family name to which Kaspar’s response was “Just like Gertrude? Are she and I nothing but slaves to the family name?” The Sterling household was divided about the subject now that Kaspar had addressed the proverbial gurgyole in the room. Some held to the right of individualism and said that everyone in the family should be free to do as they will with their lives. Others held to their roots in tradition saying rules and tradition are what built the family in the first place.

Whether it was magic that prevented her from speaking out or her dutiful nature to not defy those she was bound, Gertrude remained silent about the subject. Having reached a boiling point Kaspar claimed the ancient parchment that bound Gertrude to the Sterlings and burned it in front of his parents. Gertrude looked at Kaspar with a mixture of surprise, pride, and mostly gratitude. When Kaspar proclaimed to his parents he was leaving Gertrude bid her farewell to the younger children and joined Kaspar on his journey to forge his own life, his own destiny.

Through the years the pair have been inseparable. Now that Kaspar has established his own business, Gertrude looks forward to seeing the young boy she raised make his mark on the world, and maybe in the near future she’ll raise another generation of Sterlings; one last time.

Kaspar is a techno-wizard that constantly tinkers and invents new magical items. His devotion to his craft often causes Kaspar to miss the finer points of humanity and socialization.

Kaspar is an adrenaline addict of sorts in that he craves the rushing sensation of using his power, his mana to do fantastical/terrifying acts. Kaspar may invoke this aspect to receive a 2+ bonus to magic rolls when he is doing flashy/dangerous acts with his powers. Kaspar's trouble may be compelled whenever he must resist the temptation be use his powers in a way that would be obviously reckless or ostentatious.

Compel: When denied or resisting the opportunity to show off his power.

Life is Too Short to Last Long

Die as a legend or live as a nobody. These words echo in Kaspar's mind as he delves deeper into the mysteries of the arcane machines and talismans he creates. He doesn't remember where he heard them, but the meaning for Kaspar was clear. Unlocking the deepest mysteries of the "machine spirit" and applying his scientific findings to his craft will be the legacy, the gift he leaves behind for future generations of wizards to come.

All These Things That I've Done

Kaspar's is haunted by the failures of his past. The lives he failed to save. The people he inadvertently harmed due to short sighted, reckless experimentation. But from these failures Kaspar continues to strive forward in order to make up for all the things he's done.

Compel: Whenever Kaspar has a dramatic failure.

Long Live the Reckless and the Brave

There is an old saying "fortune favors the bold". For Kaspar that phrase is often "fortune favors the stupid" as he constantly overreaches to pull down the stars to best his opponents. It doesn't matter if the plan is half-baked or incredibly dangerous; Kaspar will do whatever is necessary to bring down any foe.

Invoke: When Kaspar must improvise with his magic.

Can use Lore for magic related knowledge.

Using a mana collector Kaspar may once per scene tap into the stored energy and refresh himself with extra mana. Immediately clear arcane stress.

The Heart Of The Armour

Slaine follows Aiden to Sterlings and uses the circlet she received from Sanka'a ... things go horribly wrong. Of course.

Zyx approaches Sterling for an appraisal, but soon learns that the jolly, absent-minded technowizard isn't as nice as he seems.

Unpleasant visions once again take Slaine in the middle of discussing preparations for that date.

Slaine and co. have an unexpected intruder disrupt their informal meeting in the streets of Vesper.

A group of intrepid companions encounter a stadium of problems in Old Richmond, and not a soul among them...

A-Hunting We Will Go

A small band of friend go demon-hunting for trophies to sell, in Old Richmond. Things do not quite go according to plan...

Slaine and Sterling are invited to Kailastias mansion to discuss some issues...

A Lot Of Firepower

Sterlings shop is quite busy - given it was closed.

Sterling, Slaine, and Nixilanthius are formerly introduced to an elemental lord on the run who proposes a profitable heist from the elemental planes.

Some very different characters bump into each other (quite literally) right outside Gran's Bed & Breakfast in Vesper.

'Garbage Day' on the outskirts of Vesper brings out all the scavengers and transporters. It's also a place for people to swap information - like the fact that a daughter of a Dogwood Knight has been abducted (though some know better). (Ghost emitted by Aiden)

On returning to Vesper, Ghost, Kaspar and Slaine meetup. Slaine has some interesting questions for Kaspar and doesn't like the answers she receives.

Kaspar decides it's time to visit Vanished Point and has some company along. (Ghost emitted by Aiden)

Aliana seeks out a technowizard to help with protecting Smoke.