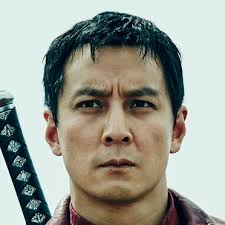 Gun's don't kill people, folks were already pretty good at that long before the world went to hell in a hand basket.

Jarrett Chi-Wang is a bit of a mystery and there is lots of speculation about him but not many know the truth or are willing to admit it at least.

Even his real name isn't commonly known and many refer to him as just "Ronin". He doesn't talk much about his past but they say he's probably from the lands to the West. He first appeared in the Kingdoms about a year ago, offering his services as a mercenary for hire, but is selective about his jobs and has a reputation of tenaciously completing it once he has accepted.

Jarrett was actually born in Dogwood, his parents were farmers and his family lived on a small rural property along the western border. His family struggled to make ends meet at times but  they did well enough to have food on the table and maintain their home. When he was fourteen years old, raiders came and murdered his family but he was saved by a mysterious stranger with two guns. The stranger was a gunfighter and had been hunting these raiders after the last town they raided hired him to track them down. The gunfighter was sorry he couldn't stop them before they killed Jarrett's family but he offered to take him on as an apprentice if he wanted to learn how to stop people from doing this to another kid's family. Jarrett accepted, first motivated by vengeance in his heart but as he grew older, he knew that he had to learn to let that anger go and that old wounds could heal to become just scars or else they would just fester.

He traveled to many places with his "teacher" and they went on many adventures together, going from town to town looking for people who needed a hired "gun" to help them with problems. They only took jobs that were righteous in nature and after seven years, he had learned everything he could and was ready to be on his own to carry on the traditions of his chosen profession.

Six years later, after making numerous enemies out in the Western lands he has finally come home and feels that their is a reason fate has brought him back. He hopes that it is here that he will finally find the answers he seeks, whether from the calling in his heart or righting wrongs with his particular set of skills.

He's an expert in weapons, war and fighting, but who has no one master or cause for which he fights, and who travels the vast wilderness in search of conflict where his expertise can be put to use.

Invoke: He can use this title to aid him in the use, handling and repair of all types of weapons.

Compel: As a gunfighter he is often sought for hire as a bodyguard, bouncer, town or business defenders, militia leaders and to assist lawmen. He is easily swayed to accept a job that falls within his code of ethics.

There will be a Reckoning

As a Gunfighter he's built a reputation and earned his share of enemies. Some communities respect and welcome him as an honorable gun for hire, while others fear and distrust him.

Invoke: Using his reputation he can create an element of fear or awe with others.

Compel: The negative stigma of his profession can sometimes be used against him by his enemies to cause ordinary citizens or towns folks to shun or hate him for his aura of fear and violence.

He follows the gunfighter's code of the New West as well as his own code of ethics, honor and professionalism.

Invoke: Using his personal code of ethics to get people to trust him, knowing that he's an honorable man when it comes to his word and it is difficult to get him to act against his code.

Compel: People can use his code against him if they are manipulative by either keeping him to his word or tricking him to help them for an unscrupulous reason.

During a Shoot attack, spend a fate point and declare a specific condition you want to inflict on a target, like Shot in the Hand. If you succeed, you place that as a situation aspect on them in addition to hitting them for stress.

Quick on the Draw

You can use Shoot instead of Notice to determine turn order in any physical conflict where shooting quickly would be useful.

Once per conflict, stack an additional free invoke on an advantage you’ve created to represent the time you take to aim or line up a shot (like In My Sights).

You can use Notice instead of Shoot to make quick, reactive shots that don’t involve a lot of aiming. However, because you’re having a knee-jerk reaction, you’re not allowed to concretely identify your target before using this stunt. So, for example, you might be able to shoot at someone you see moving in the bushes with this stunt, but you won’t be able to tell if it’s friend or foe before you pull the trigger. Choose carefully!

You can spend a fate point to draw and shoot two handguns (or throw two knives) simultaneously at the same target with no off-hand penalty or they can be divided between two different targets visible to you and within range. If aiming at two different targets, then two attack rolls need to be made.

You gain a +1 bonus to Crafts to clean, make, modify and repair your favorite types of weapons.

Ronin encounters Maddy for the first time and gets the wrong impression about her Tits.

A windfall turns into a problem just outside of the town of Tharben.