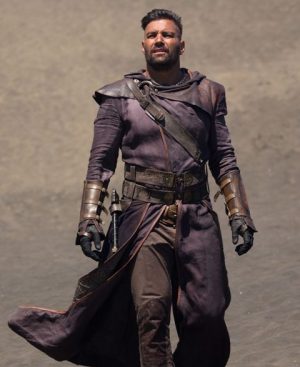 Too much humbug fer me, mate.

Clancy Drover was meant to be the next 'Clever Man' (i.e. shaman) of his Aboriginal tribe back in Australia. Unfortunately, although he proved very good in the shamanistic arts, he also developed personality traits that were not conducive to a stable, reliable village elder. It gave them cause to worry.

It began with the joining of his soul with the spirit of the Thylacine (Tasmanian Tiger), his 'totemic spirit animal' -- a source of strength, companionship and guidance. There was no way to know before the ceremony what animal would choose him... until it happened. Thylacines embrace the unknown, the dark, the secret...and when Drover found himself bound to TWO of them, their influence often overpowered his will. Furthermore, he took a particular liking to the 'taste' of magic -- from herbs, natural ingredients used as reagents in the casting of many different spells, blessings and curses.

After an altercation with the other elders, he found himself exiled from the tribe -- but not before he stole the tribe's relic: a boomerang. Riding upon Apanie -- his Ooroo, a very, very large kangaroo, big enough to easily carry a rider or two -- Drover took to travelling the world. He boarded a ship, and never looked back. Since that day, he has visited numerous countries in search of new discoveries, relics and thrills. In America, he even spent some time in Dogwood -- about twenty years ago -- having to hide his magical abilities the whole time, just for a chance at learning.

Sooner or later the Past will catch up with him, just as his addiction will someday cause him serious issues. Until then... he has a world to explore.

Drover is a 'Clever Man', the Australian Aboriginal term for 'shaman'. In his case, he is especially known in some academic circles for his travels, his knowledge of herbalism -- and rumours of his addiction and often erratic behaviour.

Invoke: Using his knowledge of herbalism, his travels, to gain a bit of notoriety, or using his skills as a herbalist for free meals and board, to win people's favour etc... Or using his calling as a shaman to protect Earth from demons. He hates demons.

Compel: Among people who eschew 'natural medicine' for more 'civilised' medical practices, or who simply dislike or disapprove of magic in general. Being 'house-bound' (i.e. stuck in some place) when he would rather be outdoors. Being targeted by malevolent spirits, stalkers etc...

There is no specific herb or 'shroom to which Drover is addicted -- his addiction is for the magic he can draw from herbs etc, no matter the effect. On the upside, it boosts his aptitude with and sensitivity toward magic (in nature). The downside is... without it, he goes into withdrawal, becomes either erratic, sick or irritable (or all of the above).

Compel: Going into withdrawal, over-dosing on any particular magic herb (to varying adverse effects), suffering criticism and rebuke when his addiction is discovered or it interferes with his activities.

Tigers by the Tail

Drover's totemic spirit-animal is the Thylacine -- also known as the Tasmanian Tiger -- and he is especially bonded with two of them, a male and a female (he calls them Grasper and Keeper, respectively). The symbol he wears for these spirit-beasts is a pair of tattoos on his arms, one for each 'tiger.

Invoke: When using the 'tigers to do something truly impressive, or drawing upon their companionship to boost Drover's morale, or bond with others who appreciate spirit-animals.

Compel: Grasper and Keeper do not always do as they are told. Drover can be Compelled by his tigers' behaviour, whether it be from his talking to them (he talks to the tattoos), or having to chase after them (once summoned).

Drover has the stomach of a concrete elephant, and he will trying anything -- anything. At least once. In his quest for more herbs, more discoveries, more 'rushes', he will put himself through hell if it means understanding and experiencing something new.

Invoke: Using his compulsion for experiencing new things to spur himself to greater feats of bravery and daring, to face the unknown, to resist fear...

Compel: Can be Compelled to stop, explore and taste even when it is inconvenient, to try things that are very likely to cause problems for himself, or others.

Any mage will tell you that magic is a natural force. Druids, Shaman and similar types of magician learn to tap into arguably the most primal application of that force – nature itself.

In the ancient lore of the world before the Fall certain plants and herbs had associations. Flowers to ward off specific evils, spices to promote memory and health. Bark or branches or ashes to invoke the blessings of trees and vines. This purview is all about calling out the supernatural power in those associations and is quite versatile, but does require ingredients.

Totemists focus on one class of spirits (Thylacine - Tasmanian Tiger) and learn to channel their power and earn their blessings directly (strength, agility, inhuman senses etc). Drover can call a pair of spirit-tigers to aid him, bestow blessings, fight with him. The Thylacine is all about braving the unknown, 'running in the dark'.

Talismongery is the study of crafting magical items, fetishes and other useful things. Talismongers bind magic into wood, stone and metal. They fashion homes for spirits or treat with them for their blessings. Effects are temporary with minor items; Drover wields a boomerang and stockwhip both made by him (neither break, and the boomerang always returns).

You have +2 Arcana when casting from Totemism.

You have +2 Arcana when casting from Herbalism.

Drover may use Arcana instead of Survive in very high magic environments (in his case, the wilderness - particularly where assorted herbs are able to grow).

You don’t ever have to spend a fate point to declare that you have the proper tools for a particular job using Crafts, even in extreme situations (like being imprisoned and separated from all your stuff). This source of opposition is just off the table.

Drover wields a magical boomerang that appears when he needs it, and always returns to him. It is much hardier, and does much more damage than a regular boomerang - particularly against demons.

You may use the Drive skill to ride living beings or artificial ones that have minds of their own.

A floating set of ashcans and more consternation for Stella

When All Else Fails: Beer

Clancy and Bridger catch up over a much needed beer in their secret garage out in Old Richmond, and Clancy gets a kick in the pants...

Keeping watch over Greywall, a newcomer and ... something attacks. (Emits by Jericho and Natsuki)

Clancy and Ardul interrogate one of the raiders taken prisoner earlier, to try and find out why the mining outpost was attacked to begin with. All is not as it seems...

While interrogating a captured cyborg raider in a mining settlement deep in the Appalachian mountains, a mistake is made -- plunging Ardul, Clancy, the prisoner Rajja, and the foreman Hector Payne into a very deep, very dark place... http://bestgamewallpapers.com/files/rift/underground-caverns_wide.jpg

Under The Shade Of A Cool-Brah Tree

When an Estate Manager from a Noble House and a Guild House Factor turn up in a Dogwood Tavern, you can be sure they mean business.

Seeking rumours and secrets, Clancy Drover and Ardul Trasinger come upon a mining town in the Appalachian mountains with some serious cyber-problems...

A herbalist and a scavenger meet in the woods. Fortunately both have goods to trade -- oh, and magic acorns.

Stella and two other Transporters bring Clancy Drover on board to fix up a brand new, utterly filthy, completely cluttered garage for maintaining their vehicles. How could anyone say no?

Clearwater is under attack from demons. Contractors respond.

A convoy of important supplies from Dogwood to Vesper comes under attack.

A Horune Pirate Ship has run aground and people need saving

A routine stop-over at a garage between Vesper and Dogwood turns into a very bad day for a couple of travellers...

There are a lot of Grackle Tooth (lizard-men) in Gran's at present, making a reunion between old friends (Drover and Bridge) and the meeting of new friends (Sindri) a trifle... interesting.

We Do This By The Numbers

Not everyone made it back to the safe-zone after a trek into demon-territory. It falls to Hunter, Ardul, Tessa, Stella and Clancy to go in and get the survivors out (in one piece, preferably)...