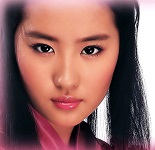 Not afraid of a little girl like me are you?

Aurana Darkmoon was born in Old Richmond, or at least that is what she thinks.  Her parents were smugglers, some of the best in the business.  They were good to her and raised her well.  She really wanted for nothing, even though resources were always tight.  Before she was born they would both go on a run, but after, only one would go at a time, the other staying with Aurana.  There were other kids to play with, but she was always a little on the smaller side, and some thought her to be a bit strange.

Her parents taught her how to defend herself, and to keep herself in good shape, after all it was something that was sort of a necessity in this day and age.  She learned a variety of weapons of all sorts.  She was fairly decent with them.  When she was 12, her parents left her to go on a run together, it was one that needed both of them.  They never came back.  She doesn't know what happened to them, if they got caught and imprisoned or if they died, or what.

She has been on her own since then.  It was about that time, either because she was becoming a woman, or the stress of her parents not coming back, latent psychic abilities were triggered and started to awake within her.  The first time she used her abilities, scared the hell out of her.  She was hunting and always killed but a wolf, but as it tried to bite her, its teeth broke.  She had hardened her body to the level of armor.  She has since practiced with her powers, finding that she can run faster, leap farther, hit harder, and take hits more than she should.  She has worked hard to develop them.  She most recently has developed telekinesis and can move things with her mind, which she uses to accelerate objects like bullets and such.  She has no need for guns, weapons, or armor, and it does make some underestimate her.

She is in her early twenties now and has been on her own for a while.  She has gotten into some scrapes now and again.  She was completely blown away.  She was doing some housecleaning and found documents, that basically said that her parents weren't really her parents.  They had been hired to smuggle her out of Dogwood and hide her.  A large sum of money had been paid for it, but there was no names.  She doesn't know what to think.  She suspects that she has some ties to the Dogwood Nobility, who else would have had enough money to do what had been done, but why?  Who was she, why was it done?  They are all questions she doesn't know the answer to.  Is it maybe why her parents disappeared.  They were still the ones that raised her.

She has taken work as a bounty hunter for Dogwood, and sometimes Vesper.  She takes contracts to go after people in Old Richmond and surrounding areas.  All the while she is also looking for hints as to what might have happened to her parents, or who she truly is.

A psychic specializing in the physical disciplines. She uses her abilities to enhance her body to fight and perform beyond normal limits. She can dabble a bit in moving things with her mind.

Invoke: When dealing with other psychics, or performing a task beyond normal human means.

Compel: When her abilities get her in trouble due to overconfidence, or ego.

Everything she thought she knew about her past was wrong. Her parents, not her parents. Who is she really? What happened to her family, both real, and the ones that raised her?

Invoke: When she gets a lead to a clue or rumor about her past, her identity, or what happened to her parents.

Compel: When a lead, or rumor turns out to be false and she went overboard trying to track it down. When someone tries to resist in one way or other of revealing a lead or clue. when someone shows up because she is digging into her past.

She takes work as a bounty hunter to pay the bills, and help her find information.

Invoke: When tracking down a mark. When trying to find possible contracts.

Compel: When someone doesn't want the mark to be found. When people are stubborn about giving information.

The ultimate expression of mind over matter to some is mastery over the very physical properties of matter. Those versed in Body Transmutation learn just this. Whereas Body Control allows a psychic to enhance the capabilities of his physical form through force of will, psychics who learn this discipline approach it from the other direction. Alter the body so that the limitations of flesh no longer apply. Hardening skin against bullets and punches is just the beginning. The paragons of this discipline can take railgun shots, laser blasts or even assault by supernatural beings. Some even learn to physically alter their forms, turning themselves into beings of living stone or metal. This power serves as narrative justification for being tough enough to stand up to high tech and supernatural sources of harm. Mechanically this ability confers armor as per normal for psychic abilities. It may also be used in any situation where toughness or endurance are the primary factors. Finally, psychics with this discipline absorb three stress instead of two when taking a mild physical consequence.

Telekinetics learn to exert force on the world around them using their mind. Some take that gift and apply it to their own forms. The leap from building to building effortlessly less by muscle power and more by giving themselves an extra ‘push’ with their gifts. They lift and run faster with the same trick. Some even learn to add that kind of force to physical attacks, turning fists, feet and simple weapons into deadly threats.

Telekinetics is the study of turning the will into pure force and for as simple as that sounds it has a lot of application. ‘Arms reach’ becomes an antiquated notion for telekinetics. If they can see it, they can affect it (or at least try). Pushing, pulling, lifting, levitating. All of that is simple. Some psychics can take it to an extreme, using their mind to accelerate small objects like a firearm, or a railgun. Others learn to put up walls and fields of pure force, blocking things out or holding them up.

Healers encourage the body to do what it does naturally, just faster and better. Psychics versed in mind over matter, though, force the body to do things it doesn’t normally do. Using mental energies to deny fatigue, hunger and thirst is just the beginning. Eyes can be manipulated to see better in the dark, ears to hear better. The body can even be forced to appear as if dead – for a little while anyway. Pushing the limits of the body, forcing it to go on by literal sheer force of will is where those versed in Body Control excel.

+2 to Will when using Telekinetics Abilities

+2 to Will when using Kinetic Control Abilities

+2 to Will when using Body Transmutation

Psychics generally grow in power as they learn to train their will. Some have naturally deeper reserves of the mental energies used to employ their gifts. You gain an extra box of exotic stress.

You may use Survival to to track and counter track both animals and people.

A rare and unusual ability, Psi Ghosts can cause their bodies to become insubstantial and pass through physical barriers. Walls, laser fences and the like are no obstacle. Detection means that rely on a physical body crossing them – trip wires, pressure plates and similar – do nothing. The psi ghost can be seen, and any arcane or psychic barriers still prove formidable but otherwise they go where they will.

(Requires Telekinesis) You can use TK to fly at the speed of a fast horse. If you also possess TK Mastery, this increases to ground vehicle speeds.

Following up on Rousseau's request, Hunter and Ardul along with Aurana and Elpida head to Old Richmond ... and find a Snake.

On The Banks Of The River

A Horune Vessel steams up the James River and tries to attack both sides. The attempt is foiled.

Something hits the marketplace in Vesper, killing people... who rise again.

Ships In The Night

A blast - physical and psychic - has several people responding and finding a Horune.

Strange forces change the sea on a little stretch of coast near Vesper.